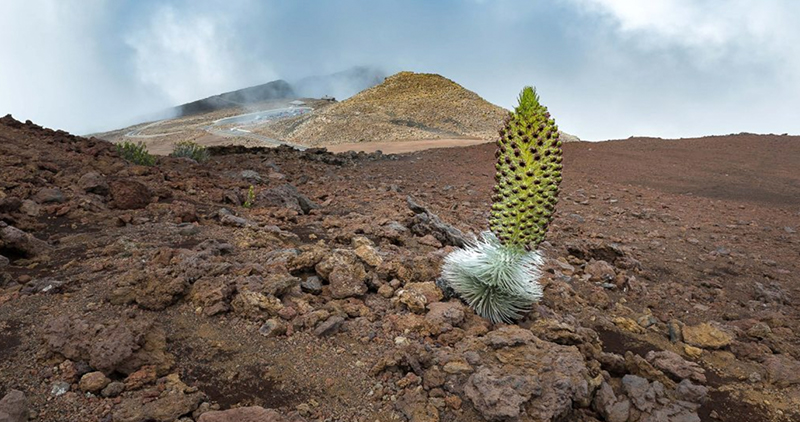 Geraniums
The Geranium cuneatum, also known as the “silver geranium,” is one of the most common species located in the Haleakalā area. You’ll recognize this flower by its small silvery leaves, covered with short, silky hairs. Think sun protection is reserved for those on the beach? Think again. The small, soft hairs on the Geranium cuneatum are there to reflect the Hawaiian sunshine in order to help preserve moisture. 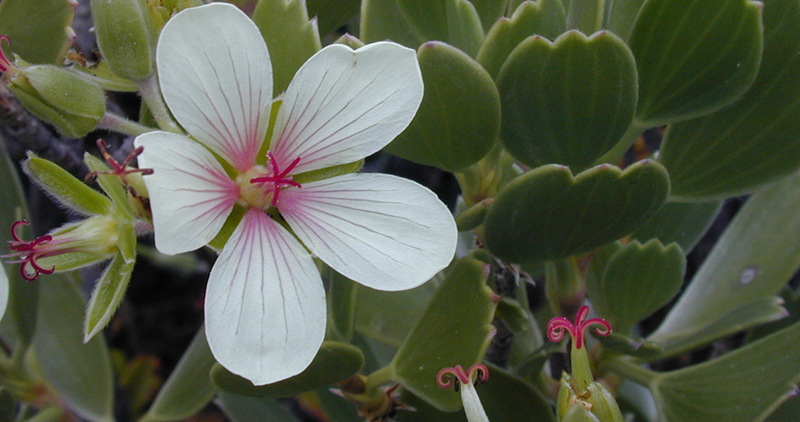 The Geranium multiflorum, also referred to as the “manyflowered geranium”, can be spotted by its small pink, purple, and white flowers. The flower’s leaves are often tinted with a red hue, which is an environmental adaptation that protects the plant from the heat of the alpine sun. The Geranium multiflorum thrives in the Haleakalā National Park area, as they’re most commonly found in high-altitude grasslands and forests. 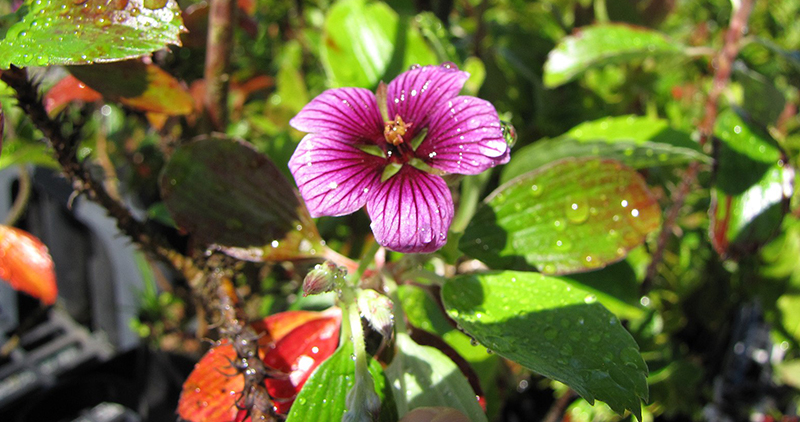 Haleakalā National Park is mostly known for being home to Hawaiʻi’s largest dormant volcano, but it’s also home to another Hawaiian rarity. The Geranium arboreum, with its magenta petals, is the only bird-pollinated geranium in the world. Unfortunately, this flower is critically endangered. Despite conservation efforts, the Geranium arboreum is now restricted to nine isolated populations with fewer than 50 individuals. Keep your eyes peeled for this small but mighty beauty, easily identified by the curve of its purple flowers. It can be found on the lower slopes of Haleakalā National Park. 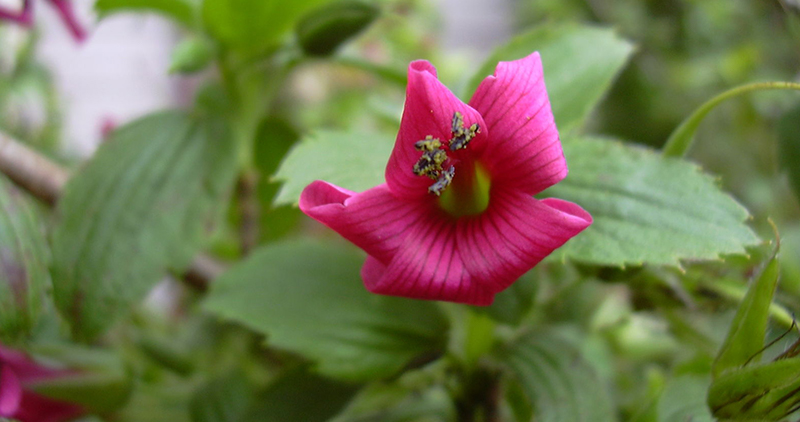 To learn more about Haleakalā’s beautiful geraniums, go to: https://www.nps.gov/hale/learn/nature/geraniums.htm.

Hawaiian Sandalwood – ‘lli’ahi
Hawaiian Sandalwood, also known as ‘lli’ahi, once covered the slopes of Haleakalā. This Sandalwood plant was loved by many for its sweet scented wood, and quickly became a hot commodity across the island. Its high-demand almost eliminated the plant off of the island, but thanks to new developments in horticultural techniques, hundreds of Koa and Sandalwood trees have sprouted across the region. In an additional effort to save this rare species, there was a large replanting effort that has effectively reintroduced this species to the area and it can now be found once again in Haleakalā National Park. Keep your eyes (and nose) peeled for these beautiful and fragrant plants when exploring between 7,000 and 10,000 feet in elevation. 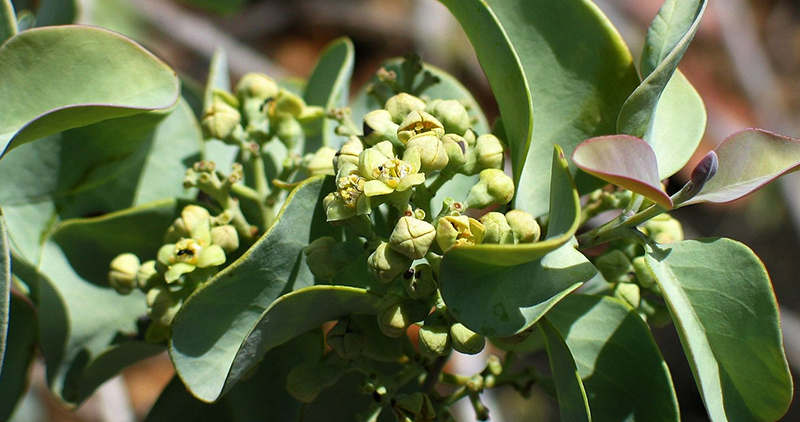 A smaller member of the goose family, the Nene Goose is the Hawaiian state bird. While the Nene Goose is a threatened species of bird, they’ve made a significant comeback after nearly going extinct a few decades ago. The Nene Goose are now commonly spotted across the islands. Be careful not to mistake the Nene for the well-known Canadian Goose, as it is believed that the Nene is a descendant of the Canadian Goose and their appearance is noticeably similar.

Wondering where you can see the famous Nene Goose? If you’re not seeing them in the summit area of Haleakalā, where they’re most commonly found on the island of Maui, try looking up. The Nene survived into the 20th century because they retained the ability to fly – where as 6 other species of large geese or ducks (some up to 4 ½ feet tall!), once native to Hawai’i are now extinct because they lost their ability to fly over millions of years of evolution in Hawai’i before human arrival, and before any predators were here. 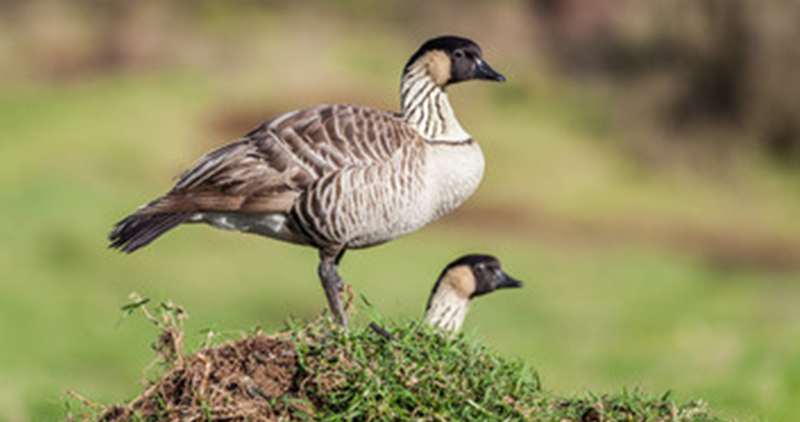 ‘Ua’u
The Ua’u, also known as the Hawaiian Petrel, is another Hawaiian bird worth looking out for on your tour of Haleakalā National Park. An endangered species, the majority of these seabirds are found on Maui, specifically within Haleakalā National Park. This area appeals to them as the lava rocks provide comfortable nesting burrows in the springtime. In fact, Haleakalā is known to have the largest nesting colony of the ‘Ua’u anywhere in Hawai’i. Pay close attention when looking for these volcano dwellers, as they’re often hiding in their burrows between 8,000 to 10,000 feet of elevation or soaring across the ocean hunting for squid. October and November are the most popular times to see the ‘Ua’u, as this is when their new chicks are learning to fly on their own before heading out to sea for two months straight. 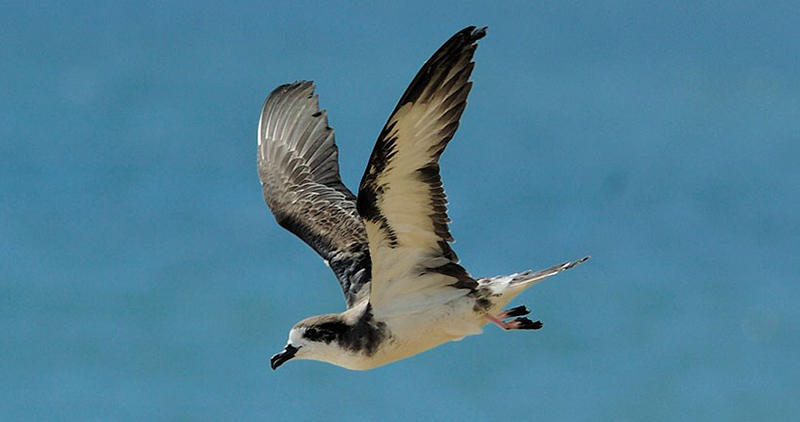 Hawaiʻi is a one-of-a-kind destination, filled with unique sights and even more unique species.
Skyline’s tours highlight these experiences and show you everything that the beautiful islands have to offer, all while keeping a pulse on the latest conservation efforts of the island. Haleakalā National Park is indeed rife with adventure and beauty, but it’s also an opportunity to explore and learn about the history of the state while experiencing the native Hawaiian wonders up close and personal.

Check out www.skylinehawaii.com to book your next adventure!