I LOVE to travel. I work so I can travel. (Also for shelter and food. And wine, of course.) Since I was an exchange student in high school, I’ve been working my way around the world and although I tend to gravitate towards certain places (Paris, again? Yes, please!), I’m pretty much open to go anywhere. Even so, there’s one place that’s never been on the top of my priority list: Hawaiʻi. Until last month…

And if I’m being completely honest (and a bit judgy), being from the mainland I’ve never considered going to Hawaiʻi as “traveling.” It’s always conjured images of my stuck-in-their-ways Aunt & Uncle who hate leaving the US and always go to the same timeshare in Kona, posting pictures on Facebook of my uncle in his shorts and black socks trying to get handsy with infinitely patient hula dancers at a lūʻau. Long story short – when it came to Hawaiʻi, I was the type of person I profess to abhor – ignorantly making assumptions about another place and culture.

As happens (if you’re lucky enough), life ‘forced’ me to face my gross ignorance and I was given an opportunity to visit Hawaiʻi.

The first thing my friends and I did once we got settled in Maui was to take Skyline Hawaiʻi’s ‘cultural tour’ – led by Kamalu Elaban. We were renting a condo located on the beach and had planned to meet Kamalu right outside. (At the time, Kamalu was developing this tour so we had a truncated version of what it has now become.) The location was great – convenient and on a beautiful beach! In the ocean, right in front of the condo building I immediately noticed a large semicircle of rocks about 150-ft long stacked tall enough to create a wall 1-2 ft above the water. I assumed it was a swimming area someone created along the way and selfishly hoped it blocked sharks from coming close… not thinking at all about how much work it would take to create a wall of 30-75lb rocks that long and high!

When we first met Kamalu – two things immediately set him apart from the rest of us: 1. He looks like a direct descendant of a Hawaiian God. Handsome, uber-masculine, tall, strong, long black hair, and striking tattoos covering his shoulder, chest, and back. And 2. His smile – full of genuine warmth and welcome. When we got to know him, he got even better… Kamalu is one of those unique people who immediately makes you feel as if you’ve known him your entire life, and because you actually haven’t, you know you’re lucky to be in his company now. We spent the next 2 hours learning about the Hawaiʻi I had not opened my heart to before. 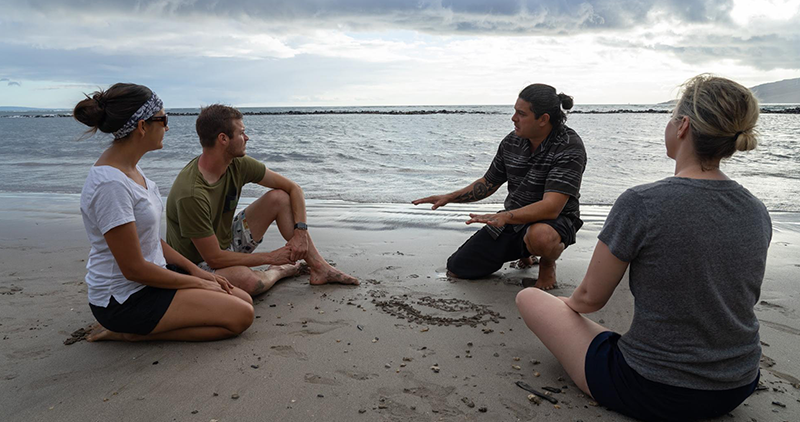 Kamalu told us about the rock wall. I was wrong, of course – it wasn’t a swimming ‘hole’ blocking sharks from taking my leg – it’s an Ancient Hawaiian Fishpond called Ko‘ie’ie! The rock wall had been built by native Hawaiians to capture fish for Hawai`i’s monarchy. Over the past several years Kamalu has dedicated a major portion of his life to restoring and rebuilding it. The wall was a part of him.

Kamalu told us about his beloved grandmother – one of the few remaining 100% Hawaiian natives. The depth of his love for his family and gratitude for his ancestry is palpable. (In contrast, I vaguely recall my mom telling me as a kid that my last name is German… I think?)

He explained how Hawaiians honor the land, ocean, plants, animals, and people of Maui – and how vital each is to the other to maintain a healthy, balanced life. (Spoiler alert – basically it all boils down to the importance of women. I knew it!)

He took us into the water and showed us the difference between the male and female rocks that made up the fishpond wall. Male rocks have a smooth surface. Female rocks have holes and indentations so creatures can crawl into them for protection. (Who knew?!) 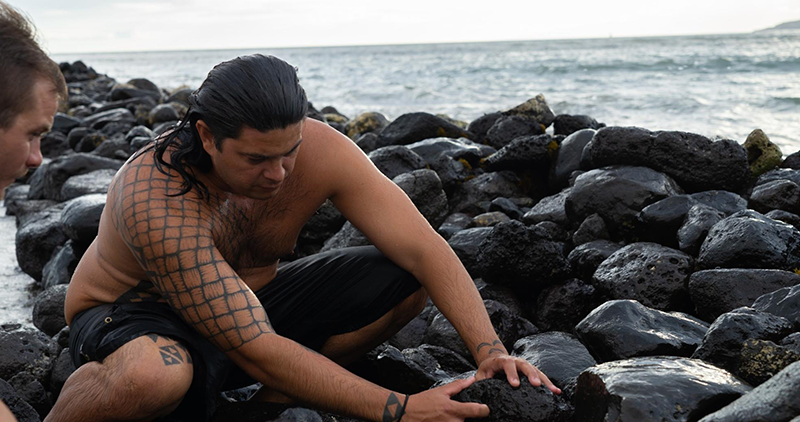 We sat in the waist-deep water and listened to Kamalu tell beautiful Hawaiian lore – like Maui lassoing the sun so his mom could work longer – while sea turtles swam behind him, poking their heads above the water and silently judging my ignorance.

It was all so… AMAZING. That word gets overused a lot in our day-to-day lives. But I use it here in its truest sense. It wasn’t a lecture and didn’t feel forced or awkward. It was simply one of the most genuine, powerful cultural experiences I’ve had in my life.

Meeting Kamalu on the first day of our trip provided a cultural context that set a magical tone for the rest of our time in Hawaiʻi and made our trip significantly more meaningful. I would never have dreamed of saying it before meeting Kamalu and having this cultural experience, but Hawaiʻi has nestled itself deep in my heart and I’m counting the days until I can return.

About the Author: Lacey is the brand director living in Portland, Oregon. She’s now slightly obsessed with Hawaiʻi.