Half man, half God: Maui. At first, you may think of the island, or the guy with the fish hook in Disney Pixar’s Moana, but there is more to the story. The details in the legends of Maui may differ depending on who’s telling the story, however, the general ideas remain consistent.

Maui had four brothers, all of whom were impressive fishermen. Maui, on the other hand, was not great at fishing but wanted to try and prove his brothers wrong. One morning, Maui asked to go fishing with his brothers. Though reluctant, they allowed it. Maui had a magic fish hook, which he cast deep into the water while at sea. It felt like his hook had gotten stuck on something and he could not bring it back up.

He felt the pressure weighing on him from his brothers to catch a big fish, so Maui told them to keep paddling and not look back. The brothers kept paddling and paddling, Maui continued to tell them to not look back until finally, curiosity won the brothers over. When they looked back, all of the Hawaiian Islands had been pulled up from the bottom of the ocean. The eight Hawaiian Islands Maui captured were Hawai’i, Maui, Kaho’olawe, Lana’i, Moloka’i, O’ahu, Kaua’i, and Ni’ihau. 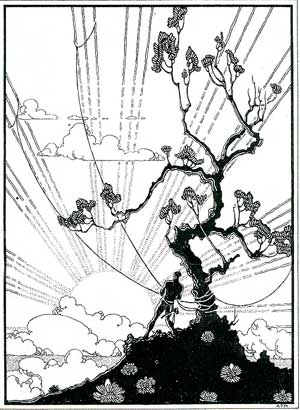 Maui’s mother, Hina, was a very hard worker. She would work all day preparing food and making clothes, but there wasn’t enough sunlight to finish all of her tasks. She had many kapa cloths to make. Kapa was a type of native cloth made by pounding the fine bark of certain trees with wooden mallets until the bark had turned into a sort of pulp. She then had to pound the pulp into sheets, which needed to dry in the sun for a long time, but each day was too short as the sun sank into the underworld eagerly.

Maui became brave, and promised his mother he would capture the sun, and bargain with the sun to slow down and make the days longer. To do this, he needed a strong rope and lasso, which is mother and grandmother provided for him. After studying the ways of the sun, Maui climbed to the top of Haleakalā (house of the rising sun), and lassoed the sun. The sun was caught and could not hurry across the sky. After conversing for a while, the sun agreed to stay in the sky longer for Maui’s mother and for other Hawaiians who needed to complete their tasks during the day.